When this trend first started, companies often gave their products to famous influencers to receive product reviews, they would then receive feedback from individuals, similar to reviews received in a focus group. However, it soon became very marketable to have reviews of the products posted publicly because the masses appear to be very interested in the products after exposure through reputable beauty gurus or influencers.

It is undeniably still somewhat useful to continue to market products and services through such influential people, but it appears that in recent years the marketability has somewhat shifted. The public appears to be less trusting of large accounts, due to the fact that they have begun to understand that a lot of big social media accounts receive payment for promoting the brand, therefore they can come off as being biased in their reviews of the product. To counter this, there is a recent emergence of “micro-influencers”. These are still Key Opinion Leaders, in that a lot of their audience will monitor their accounts to view their latest posts but the difference is that they have a smaller following and appear to be less of a celebrity. The other possible benefit is that a lot of these micro-influencers are content with giving a good review of a sponsored product without extra payment. The company may then have a lot more budget to use on many micro-influencers as opposed to one big influencer.

In Hong Kong, there are now many platforms for companies to reach out to key opinion leaders with followings of all sizes. They act as agents to find the right influencers in the niche to promote the relevant product. Since companies often look for micro-influencers nowadays, it may be easier to use the platforms to collaborate with these influencers rather than looking for smaller accounts privately. There are often statistics to come with the effect of certain influencers through the agent, such as the number of views and likes of different influencers.

There are currently influencers in almost every field, there is even more success if the influencer targets a specific niche audience. For example:

The niche can be as specific as the influencer makes it. Effects of the product advertising can be maximized and even become viral as long as the influencer in the relevant niche promotes it. The reason is that the target audiences of the account are exactly the potential customers of the company. It has become quite common for people to click to buy the product online right away after gaining interest from posts. If similar posts of the same product by different people show up constantly on their feed, they will often be curious to at least try it for themselves. Recently, a popular example of a niche would be Hong Kong YouTuber “Cat Girl”. She gained the love of the normal Hong Kong working class (with over 48k subscribers on her channel) by sharing tips on how to travel cheaply and eat good meals at the cheapest price. 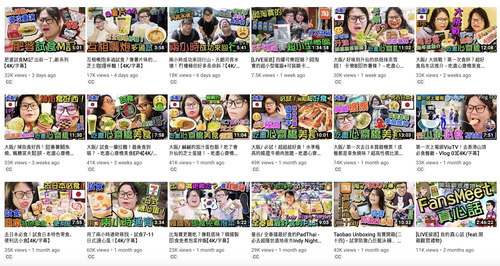 [Cat Girl’s videos on her channel]

Tips to maximize the effect of their advertisement while using KOLs in promotion:

1. Opt for quantity as well as quality - using many different micro-influencers at once may be better than just one big KOL to represent the brand.

2. Use a platform to help you - they will be able to take care of contacting interested KOLs and make sure the desired standard is delivered.

3. Find a niche KOL to suit your brand - there are KOLs suitable for every specific type of product. It may help to target specific audience to collaborate with these KOLs specifically.